"So... what are going to do when you graduate?" 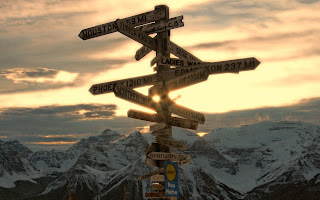 There are two questions in life that make you want to punch people, over and over again.  The question above is one of them, the other is "So… are you still single?"

I understand that people are interested to know but there is a time and a place (that time and a place being in a careers office).  There are only so many times that you can have the most awkward conversation with someone that goes something like this:

Person: Have you decided what you're going to do after university?
Me: No.
Person: Oh right, well don't worry too much dear, not many people do, do they?
Me: Mm.

*I never said that to anyone don't worry!

Anyway, anyway, I wanted to tell you that it gets better.  That even though you may go through the whole of school and university not knowing what your going to do with your life, thinking that everything is pointless and stupid, it does gets better.

I'm a girl that likes a plan.  I want my life mapped out, well at least the next year.  I spend most of my childhood convinced I wanted to be a primary school teacher.  I think I lived quite a closed childhood and thought that that was all that was out for me.  I went to university and realised the world was a lot bigger than I had first thought.  There was so much out there that I wanted to do or could do.  I was studying Childhood Studies at Bristol University and during the first year I had some massive wobbles.  I didn't like the course very much (it did get better) and I wasn't that keen on being away from home.

My world had been opened up but I was still doing my narrow course on childhood.  There were so many opportunities out there that I wanted to do but I was restricted by my course.  Or at least I thought I was.  I started trying to think of other courses that I might want to do instead.  Business maybe or… or what?  That was my biggest problem.  There was nothing else I wanted to do.  I couldn't see myself doing anything else. The only option was to continue with my course and hope it got better.  Although I didn't want to work with children I convinced myself that getting a degree from a top university was in itself a great achievement.

I still want to be a teacher one day and I have the utmost respect for them but for me I feel that I am settling if I choose that as a career path.  This led to difficulties when I was asked that question, what are you going to do?  I didn't know.  I didn't want to work directly with children, if at all, but I couldn't see myself doing any other job.  I started to resent my course because I thought that I would never use any of the knowledge I'd spent three years learning.  Each week I would think of a different career path; educational psychologist, TV producer, TV researcher, journalist, writer.  You name it, I'm sure I considered it.  My time at university was coming to an end and I was getting worried. Luckily my Dad came to the rescue.  He gave me two pieces of advice:


The second one has been the most useful.  I started doing some work experience in a field (not an actual field with mud and grass I hope you understand?) and that led to more work experience, which has now resulted in some paid work and a paid internship. I'm not going to tell you were it is, that's not the point.  I'm not even sure this is the career path I want but it's a start.  I need to go down this metaphorical road for a bit and see where it leads.

I was so over excited the other day when stuff I learnt on my actual course was relevant to real life.  I never thought that day would happen.  There are still other roads I want to go down.  Some are running parallel and some might be at the end of the road I'm on (I'll stop talking about roads now I promise).

This world is horrible for the graduate but you've just got to claw onto something and get dragged along for a bit before you claw onto something else.  One day like me you realise that it wasn't all as pointless as it once seemed.  I've still got a long way to go.  A really long way to go (I've got to get an actual job for starters) but for once I'm excited to see where I might go.

Don't lose faith when you have no idea what you want to do and yet another person has asked you the dreaded question.  Just pick something, anything and run with it for a while.

In the past people used to have one job and stick with it.  We don't have to do that.

Good luck - it's a tough old world out there and I'm still only in the outskirts.

ps. Listen to S Club 7's "Reach"whilst reading this (mainly just for lols but also because of the lyrics - no one knows just what the future holds, there ain't nothing you can't do, there's a whole world at your feet… (lyrics from memory btw) - they were very wise souls S Club 7)