What with Halloween just round the corner I thought we should have a little think about.  Just a little one... 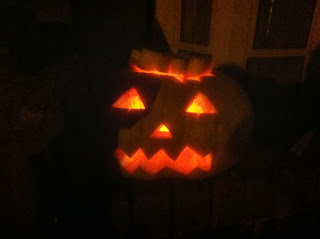 (my pumpkin from two years ago)

October is a strange month.  It marks the beginning of dark, gloomy days and dare I even mention the ‘C’ word, Christmas.  It’s not actually the beginning of Christmas though is it, because Christmas should only be mentioned in December?  October should solely be about falling leaves and Halloween.

When I was little I never did Halloween.  Partly I suspect because I lived on a small country lane where no one talked to their neighbours but mainly because my mum didn’t like it.  We were allowed to put out a pumpkin but because no one lived on our lane no on ever saw it.  It was pumpkin for our eyes only.  I never questioned it until my friend invited me to a Halloween party.  She and most of my friends were shocked that I had never been trick-or-treating (or trickle treating as I spent most of childhood believing it to be called).

The reason my mum didn’t like it was because she thought it was rude and unkind to demand sweets from strangers whilst issuing threats of turning their houses into a scrambled egg.   Being completely unaware of Halloween traditions I had no idea why I would ever feel the need to egg someone’s house.  I just wanted the sweets!  My mum’s other reason was that it was an American tradition (looking back I don’t think my mum much liked the Americans.  Father Christmas for example was never Santa because that was what the Americans called him).

I feel now would be a good time, mainly for my own benefit, to tell you about the origin of Halloween.  According to the well-respected source Wikipedia, Halloween is “the eve of the Western Christian feast of All Hallows… dedicated to remembering the dead”.  Well that doesn’t seem too bad.  I’m a Christian (as was my mother) and as a Christian festival I should definitely be able to eat sweets, right?  Wikipedia goes on to say that trick-or-treating originated from “Souling”, which is the custom of sharing soul cakes.  Children and the poor during Hallowmas would collect soul cakes ‘as a means of praying for souls in purgatory’.  Collecting money or food for the poor seems like a good idea but that is not what Halloween is today.

I really enjoyed going trick-or-treating with my friends and I think it can create a lovely community atmosphere.  However I do worry about those people who are forced into taking part, who don’t want to open their doors to strangers and definitely don’t want their houses egged.  I think the point of Halloween (and a lot of other Christian festivals) has been lost and the present day traditions are really not very moral (I’m thinking mainly about the scariness, for the wrong reasons, of provocatively costumes now).  Nevertheless I think I will always enjoy carving out a pumpkin!