It's "About Time" Richard Curtis wrote another film... 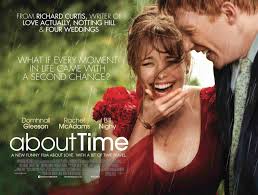 
So the main question surrounding Richard Curtis' new film About Time is - if you could go back and re-do a day, which day would it be?

For me it would be any day that my mum was still alive.  I'd go back and savour every moment and ask her all the questions I was too young or too naive to ask.   The reason this question surrounds the film is because the man guy Tim (Domhnall Gleeson - Bill Weasley from Harry Potter no less) can travel back in time.  Just like his father (Bill Nighy) and his father.  In fact all of the men in his family can. If they screw up a day, they can go back and try again.  Tim uses it to get a girlfriend (well we all would, wouldn't we?), enter Mary (Rachel McAdams).

I think this film is a bit of a trick (sorry I mean lesson) you play on children.  "Charlie really hate going to bed.  He never wants to go to bed do you Charlie?". Charlie is now confused and says authoritatively, "Yes I do".  He has inadvertently agreed to go bed.  Poor Charlie.  How is this related to the film you ask (oh you didn't? Rude!)? Well I will tell you.  In the film Domhnall's character can time travel but in real life you can't.  I know, no shit sherlock.  I think that clever Mr Curtis or Mr C-Dog as I like to call him is saying to us, "You can't travel in time (again no shit sherlock) so you need to make up for that by making the most of each day".  I know it's hard when you're at work or at school or  if you're like me look for work.  I constantly get to the end of each day and think how pointless it was.   We can't re-do days so we have to think about them before we start.  We need to think before we speak and think before we do because once it's happened there is no turning back.  It sounds a bit cheesy (also known as wankery) to come away from seeing a film and saying "Oh, no it was much more than a silly rom com, the underlying message was so deep and moving.  It's made me like totally rethink my life. Yah." People who haven't seen it, will either a) laugh or b) walk away or c) do both.

A couple of days before the film was released I listened to it being reviewed on Front Row on BBC Radio 4.  The review panicked me.  I don't think I was old enough to see Richard's earlier films at the cinema so I was never aware of the reviews.  What happens if the film was awful I thought? I love Mr C-Dog, it can't be awful!

After a while of thinking and reflecting (I'm so deep man) on what they had said the more annoyed I became.  It was as if they were comparing Curtis to Pinter or... (I worryingly can't think of anyone else, nor do I know who Pinter is) His films should be compared to other Romantic Comedies - not RomComs I might ad, they are in a different league and normally involve Jennifer Aniston.  No About Time should be compared to the Notebook or the Time Traveller's wife. It's not fair to compare it to some cultural French film with subtitles. It's like comparing a Scientist with a Painter.  They are both equally good at what they do but you can't compare them.  In Richard's category (in which he can be described as some kind of God) he trumps everyone else and so does this film.

By the way Camilla Long, the Radio 4 reviewer, said that Richard always writes romantic stories and shouldn't he try something new.  That's like telling a painter perhaps you try doing some sewing instead.  It's utter bollocks.  If you are good at something, which Richard so clearly is, then you should keep doing it.

About Time is a truly unique, must see film that will fill you with happiness and love and a new zest for life.  Don't compare it to some French subtitlely crap compare it to the new One Direction film.  Although having said that, the 1D (check me out) film is probably of much higher quality story telling tell than any French film so perhaps go and see their film instead.

So there you go.  Go and see the new One Direction film it's probably way better than any Richard Curtis film... Wait, what? Oh I give up!

ps. Do actually go and see About Time (Mr Cowell really doesn't need you money).  Don't read the reviews (except this one obvs.) just go with no expectations and you should experience something truly lovely.

Don't even watch the trailer.  I hate trailers, they may work in getting me to see the film but they also tell me everything that is going to happen.  I'm always disappointed when I see the trailer first.

pps. Make sure there isn't a couple trying to have sex on the row behind you.  It's kinda off-putting!
Posted by Unknown at 04:34