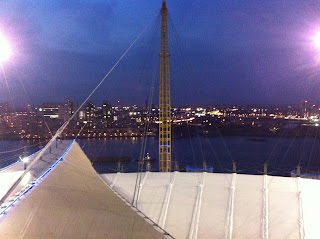 The last time I went to the O2 Arena I was doing the Shine Walk for Cancer Research in 2011.  A gruelling 13 miles (half a marathon) in the dark.  I'm still not sure why I decided to take this challenge on my own.  I mean don't get me wrong it's for a great cause, but I really didn't think it through.  If I remember rightly I had originally planned to do a 5km run but decided that was too easy and if I really wanted money from people I would have to do something more difficult.  That thought didn't sink in and if I'm honest (despite the fact that I can't walk for more than five minutes without getting blisters) I didn't think it would be that hard.  The walk started at 11pm and I was convinced I would be finished at 1 maybe 2am.  It was a laughably stupid thing to think.  I even did no training as I thought I would be fine.  I was so very, very wrong.  I believe it was closer to 4.30am when I came to the end of the walk, covered in blisters and hobbling towards the O2.  On a side note, if you ever decide to do a late walk on your own (I wouldn't recommend it, you need the moral of others) audio books are great.  I laughed (out loud) the whole way round listening to Michael McIntyre's book much to the bemusement of other walkers.  Anyway, I had nearly arrived back, the O2 was insight and I thought that finally I could sit down and more importantly sleep, but no.  To finish the walk you basically had to walk almost the entire circumference of the building to get your medal (I couldn't have cared less about my medal) and then once you had finished you had to walk all the way to your parked car and drive for an hour to get home!  I really wouldn't recommend driving at 5am having had no sleep.  It really isn't safe.  I can safely say I wasn't looking forward to seeing that dome again.

This time however it was going to be a bit different.  I wasn't going to walk the circumference of the dome (and London) I was going to walk the radius.  I was going to walk over the top of the dome.  I was going "Up at the O2".  I had no idea what I was letting myself in for but it seemed like a fun idea to walk over the Millennium Dome.   When you arrive you have to fill out a "Death Form" as I like to call it, which is for their insurance in case you fall off and die, or more likely injure yourself.  Then you are taken into a briefing room.  I felt like I was going to be launched into space what with all the equipment but sadly we were just going 52 meters above the ground.  There is then a very cringeworthy video about common sense health and safety crap that the majority of people are sensible enough to know without being told.  The guy being filmed tried to be funny but sadly his audience is far too British to seen to be laughing at the "Dad" jokes.  The only interesting thing I learnt was how much effort they put into building the dome to make it fit in with the Greenwich Time Zone thingy which it is apparently on.  This means that the dome is 365 meters in circumference (365 days in a year), 52 meters high (52 weeks in a year) and probably some other time related measurements that I can't remember.  Then I was told many-a-time to go to the toilet (I'm not 6!) but I listened anyway because I have the bladder of a mother (sorry).  You then put on your harness, jackety thing and special grippy shoes before you make the assent.  We had a guide that strangely learnt my name at the beginning and seemed very proud of this fact and so every time he spoke to me he used it.  At first I felt special, by the end I was a little bit weirded out.

It was quite a steep climb up and then down the other side but once you are up, the views of London are great.  I think the bit I enjoyed most was the ascension and the declension mainly because I could laugh at the ineptitude of my fellow climbers.  Having said that looking over a dusked London in clear skies was pretty special and at the end of our trip someone in Greenwich set off some fabulous fireworks to end our evening.

I would give the evening 4*s  especially as you can get cheap tickets for a mere £25 which I think is pretty reasonable.

Forget the crappy London Eye (no one has bothered talking my up it, so I assume it's crap) and face you fears to climb the Millennium Dome (sunset would be the ideal time) and go "Up at the O2".  I dare you.