I am so excited about this blog post because I made up a recipe and it actually worked!

It was close to the end of term and one of my housemates had an essay deadline and the other and exam. I decided that I would make them a treat. The day before I attempted to make scones but I forgot the baking powder so it wasn't the best treat for them. Also someone let it slip what I was making so it wasn't even a surprise. Having made something sweet I thought I would try savoury and my friend had hinted that cheesy bread might be nice. I really enjoyed making my eight-strand plaited loaf so I was eager to make more bread. In Paul Hollywood's book: How to Bake there is a recipe for all day breakfast rolls. He also has a sweet version which are Christmas rolls which I made with a friend last year: 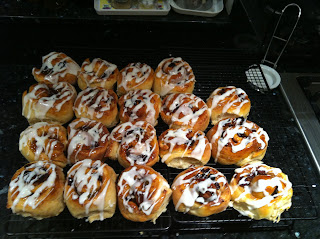 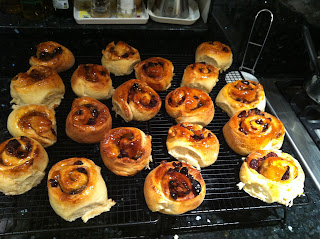 They are sort of swirly (yes, an official term) rolls. I wanted to have a go at Paul's savoury buns but I didn't really fancy his breakfast variety. This is where I went off piste. I decided that I would make garlic and cheese rolls.

I followed his recipe for making the bread and then I improvised. I chopped up 3 cloves of garlic and fried them in a saucepan with a large knob (technical* term. *no really it is) of butter and a sprinkling of oregano (by the way if you want to make this an actual surprise, don't cook the garlic when people are in the room as apparently garlic is very smelly!). I spread this mixture onto the dough followed by some grated cheese. If I were to make it again I would add more cheese and more garlic butter because I don't think my bread to filling ratio was quite right. I then went back to the recipe and rolled up the dough, left it to prove and then cooked it. I forgot to take pictures as I went a long, but here is the finished project. They are definitely best served straight out of the oven (once they have cooled a little). 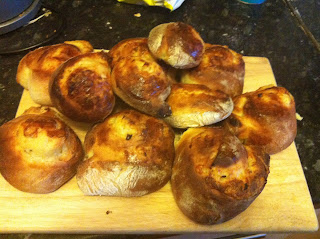 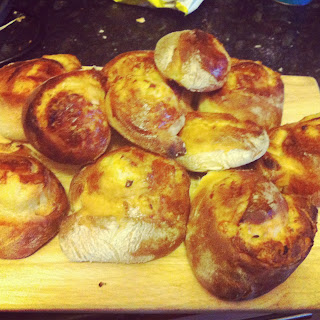 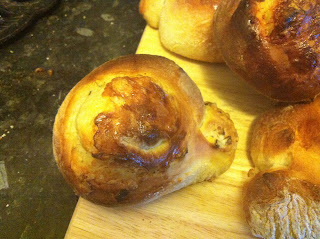 When I make them again I will measure how much of everything I use so that you can have a go too.  They really are super easy and super yummy!

Come back this weekend for some easter baking treats!