Just a quick blog post today as I am in the middle of writing an essay!

Friday night TV at the moment has been pretty amazing hasn't it? Would I Lie To You? Have I got News For You, Not Going Out, QI, Twenty Twelve, The Graham Norton Show, and now... Episodes!!

Episodes (Golden Globe winner) is now on its second series. It stars none other than Matt LeBlanc (Joey from Friends), and Stephen Mangan and Tamsin Greig (both from Green Wing - love that show!) It is basically about a couple (Mangan and Greig) trying to make a television programme in America where Matt LeBlanc is the lead.  It is absolutely hilarious and if you haven't seen series one, I seriously recommend it.  However I don't think it should stop you from watching series two tonight.

It is on BBC Two at 10pm and you would be a fool not watch it with me!

If you are revising or writing essays, good luck, and don't work too hard! 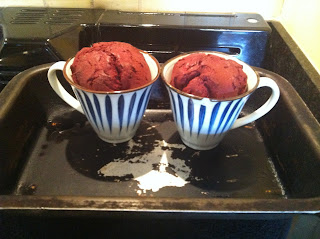 Ok, so not exactly a blog about television, BUT before you stop reading I will mention some TV near the end, so bare with me!

There were quite a lot of steps, but it turned out and here's how to do it:

I used this recipe from BBC Food and adapted it to work for me.

You will need:
(this is enough for 2 teacups, that will take 250ml of liquid each. I would recommend using smaller teacups, so 5 100ml teacups):

For the icing
Posted by Unknown at 14:22 No comments: